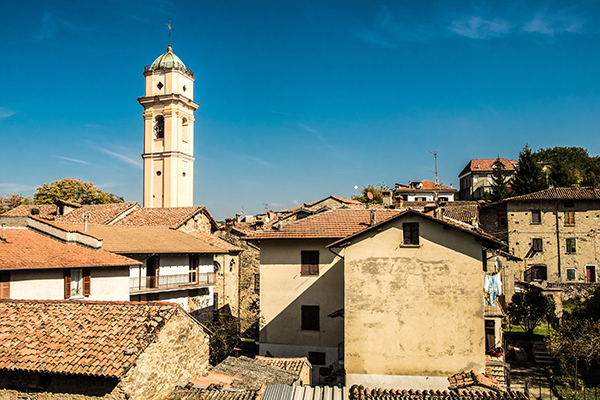 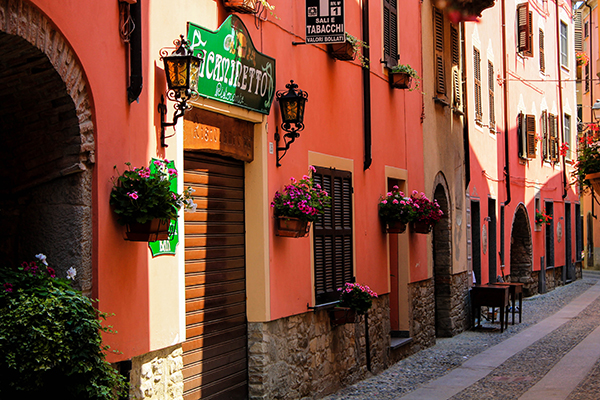 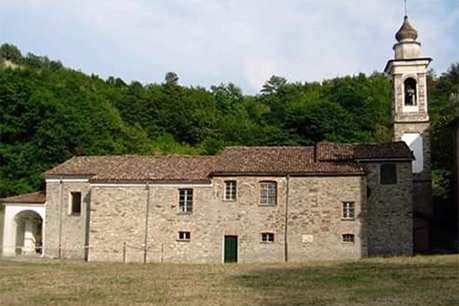 The parish church.
Construction of the Parish Church of Garbagna, dedicated to St. John the Baptist, began in 1714 to the design of the Genoese architect Giovanni Battista Storace. The building was erected on the site of, and in part with the materials of, the previous Roman church with the original vestry and bell tower being incorporated in the new church. The tower collapsed due to an earthquake during the night between the 8 and 9 October 1828 which threatened to bring down the entire structure.

The interior has an octagonal design with eight columns that divide the central area from the aisles and was decorated by Giovanni Battista Parodi. The aisles have three altars on each side with on the left, the altar of Saint Anthony Abate, with a noteworthy canvas above it depicting the Madonna with baby Jesus and the Saints Joseph, Francis and Anthony which dates from about 1630 by an unknown artist then the altar of Saint Joseph with a painting “The passage of Saint Joseph” from 1727 possibly copied from Giovanni Solaro. On the right is the altar of Saint Just with a 1947 canvas by Teresio Beroggio entitled “The martyrdom of Saint Just”, the altar of John the Baptist with a wooden carving of the same, carved by A. Nori in 1943 and finally, the altar of Saint Anthony of Padova with a painting attributed to Carlo Antonio Durante from the early years of the 18th century and entitled “Saint Anthony reattaching a foot to an injured person”. The rectangular presbytery, featuring two balconies, houses the old organ on the left and its newer twin on the right. In the centre of the apse is the coloured marble altar from which rises the figure of Christ attributed to Antonio Maria Maragliano. The choir stalls are beautifully crafted and above them is a large canvas showing “The beheading of John the Baptist”, work of the Genoese artist Antonio Giolfi and dating from 1756.

Other points to note are the beautiful coloured marble pulpit of Salvatore Solaro, dated 1957, the canvasses placed next to the four entrances among which on the left is depicted “The baptism of Christ”, attributed to Guglielmo Caccia known as ‘Moncalvo’ and above the door of the old vestry is the figure of ‘John the Baptist in the desert’ attributed to Gregorio de Ferrari or his school, dating from the early 17th century.

The oratory of San Rocco.
The oratory, constructed between 1686 and 1699, features a façade with frescoes attributed to the style of Giovanni Battista Carlone although by the conclusion of the work he was already dead.

Inside, in the single span room, two recently restored canvasses can be admired in the presbytery which are attributed to the studio of Luca Cambiaso and in particular to his son Orazio. The other canvasses need to be studied and restored. The main altar is characterised by a strange niche made of clouds and angelic figures with a statue of the Virgin Mary inside.

The story of the building is connected to the end of the war between Guelfi and Ghibellini. The legend tells of the appearance of the Virgin to a mute shepherd, ordering him to go down to the village, speak to the people to persuade them to stop fighting and erect a sanctuary on the site of the apparition as a token of the peace made between the rival factions.

The peace was signed and the sanctuary was built, showing that at times legends and history go hand in hand.

The site is suggestive and the old sanctuary does not lack in interest. The central altar features a niche with a 16th century fresco, the work of Pio Gallina, depicting the Virgin surrounded around the border by thirteen figures which may represent Christ and the twelve Apostles. Also worthy of mention are two high quality 17th century canvasses and a number of religious dedications.

During the 1950s a new sanctuary was built next to the original. The rendering work has recently been added with assistance from the local Alpine troop. Inside a fresco can be found in the semi-circular ceiling inset by an unknown artist while the ceiling frescoes are by Clemente Salsa. A processional statue of the Madonna of the lake by Maison Verboutten of Paris was originally hosed in the old sanctuary.

The old village.
The old main street seen today has evolved from the original medieval village which nestled below the rocky outcrop of the castle and dates back to the end of the period of dominance of the Fieschi family and the beginning of that of the Doria family at the beginning of the Renaissance. In that period, it was lengthened up to the bank of the Rio Garbagnola and towards the Ponte del Tonno (The Tuna Bridge!) and opens onto the spectacular square named after Prince Doria. Walking along the street, the visitor will notice a large number of closed up workshops characterised by odd shaped doors and shutters that cover the shop windows. Once, these housed thriving craft businesses, a variety of food shops, cafes and eating places that were the heart of a lively village.

The main square.
The main square named after Prince Doria, represents the pride of the villagers who are convinced (and it’s difficult to say that they are mistaken), that it is the most spectacular example in the entire area. Facing on to the square is the building which housed the offices of the Feudal Governor and on the adjoining side, the Oratory of Saint Rocco. On the opposite side there a couple of restaurants, one of which features a fine sandstone archway. A number of small streets and alleyways branch off the square all of which make the admirer wonder where they lead to.

In the centre of the square are four magnificent horse chestnut trees surrounding an arch which at one time supported a small brick tower which covers an old well. The water drawn from the well was extremely pure and was used to turn a large metallic waterwheel. The trees were planted in the mid-19th century.

The castle.
When climbing up towards the castle, the first recognisable remains are of the gate, some traces of the wall and a watch tower. Some historians date the castle back to General Costanzo and the campaign to defend Libarna Romana from the so called ‘barbarians’ while others date it as originating from the 9th century.

The place itself is very suggestive with a view towards the Grue valley and a large central area, which until the 1950s was home to a vineyard rather than the more recently-planted trees dominated by an older giant linden tree. The rest is just ivy…

Casa Fieschi.
Vie Fieschi, perhaps the oldest street along with Via Gatti (Cat Street) leads directly to the residence, now private, that at one time was the property of the Fieschi family. It is an imposing building with original remains merged with more recent additions that feature well-tended gardens inside that are occasionally open to the public.

Doria Palace.
Records referring to the palace date back to the first half of the 17th century at which time it belonged to Angelo Maria Baiardi. The property was confiscated by the prince against a debt owed to him by the Garbagna Chamber of Commerce. From that moment onwards, 8 September 1683, the palace became the headquarters of the acting Governor, Prince Doria.

The current layout of the building is owed to a series of works started in 1716.

The palace remained in the hands of the Doria family until 1855, when it was purchased by Luigi Baiardi, the then district GP for the Garbagna area, who later died without heirs. The local council attempted to buy the property with the intention of making it the town hall but was outbid by Carlo Gentile who successfully offered the sum of 10,200 lire on 2 October 1888.

Since that time the building has remained private property.